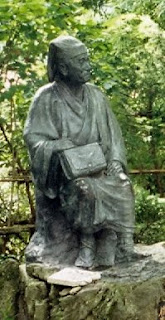 I've never actually been to Sado Island. Haven't even been to the part of the Japanese coast where Basho stood and marvelled at the view. Doesn't matter though, because today's post is more about the vagaries of translating haiku than it is about the places themselves.

One of the most impressive poems found in Oku no Hosomichi was written while Basho stood on the shore of the Sea of Japan, gazing upon forlorn Sado Island--a land of exile and unsafe gold mines.

Turbulent the sea--
Across to Sado stretches
The Milky Way.
(Keene)

What an evocative image. The wind blown sea contrasting with the stillness of the island, with the Milky Way visible in the cosmos. When I explained the elements that made it such a stirring poem in English to one of my Japanese students, she demurred, suggesting that Keene had captured the literal meaning of the poem, but not its sense. A look at a couple other translations did nothing to usurp the position of Keene's effort. If anything, they seemed even more literal.

With the help of my student, I produced the following translation, attempting to capture the mood she described, while retaining the sense of vigour I felt reading the poem the first time.

How restless the sea--
And smothering Sado Island,
the cold galaxy.

Reading it again after all these years, I still feel an existential chill. It makes for quite a contrast to the three versions shared above. In one respect, "smothering" is too liberal a translation of よこたふ (yokotafu--lying still), but it helps invoke the cold indifference of the universe that seems to be expressed in Basho's original. For what it's worth, my version did gain the approval of my student at least.

The second poem I attempted to translate was at my own initiative. Like the Sado Island haiku, it was one of my favourites upon first reading. It was written on the road near Kanazawa around August 29, 1689 (that's the seventh month, fifteenth day, second year of Genroku for you history buffs).

Redly, redly
The sun shines heartlessly, but
The wind is autumnal.
(Keene)

Can Japan get hot in late August? No doubt. Still the idea of a "heartless" sun evokes more of a mid-summer image for me, when in fact, the sun is already beginning to lose its power. The word "heartless" itself does not appear in Basho's original poem, but I riffed on the idea from Keene's translation to come up with a different interpretation:

Unfortunately for me, a more literal translation proves that Keene's interpretation captures Basho's intent better than mine did:

red, red, sun
despite its indifference
there is an autumn wind

The first mistake that coloured my opinion was thinking of a red sun as weak. Whereas in the West a hot yellow sun has more power than a red sun one might see at sunset, in Japan, it is the red sun, 真っ赤な太陽 (makka na taiyou), that is the hottest. The second key word is 難面 (tsurenaku) which means indifferent. I wasn't aware of this meaning at the time I attempted my translation, mistakenly deriving my own from Keene's word choice. Knowing what tsurenaku means now, I must admit the poem is contrasting the heat of the sun with the coolness of the wind. The one consolation of my mistake is that I ended up with an original poem of my own, instead of a translation.

P.S. I couldn't resist sharing the following clip of Misora Hibari I found while double checking the kanji for 真っ赤な太陽. Tokyo Ska Paradise Orchestra also recorded a great cover of this classic summer tune. (Edit: This video was replaced on March 8, 2014 since the previous one was removed from YouTube.)

Comments are welcome in English and Japanese. I would love to hear from you.